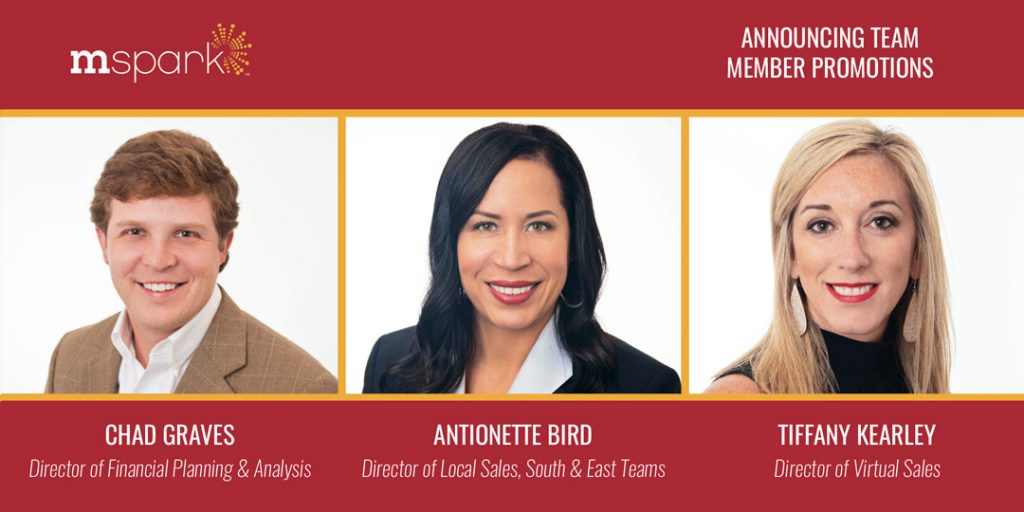 HELENA, Ala. – July 1, 2019 – Mspark, a leading national shared mail company, is proud to announce the following promotions.
Chad Graves has recently been promoted to Director of Financial Planning & Analysis. Chad joined Mspark in August 2013 as a Senior Corporate Accountant and moved to Financial Planning & Analysis as one of the first associates to join the Financial Planning Team in August 2014. Since joining FP&A, he has helped build the team, identified opportunities to streamline processes, and has been instrumental in assisting with the acquisition and integration of 6 companies. This experience has given him an understanding of our company and business that has prepared him for his new role.
Antionette Bird has recently been promoted to Director of Local Sales for the South and East teams. Antionette joined Mspark as a Territorial Sales Manager in 2015, bringing a background in sales leadership and various training management roles. She was awarded Sales Manager of the Year after completing her first full year with Mspark.  Antionette has championed and partnered with department leaders to ensure adoption of processes and systems, which will be key to her continued success in her new role.
Tiffany Kearley has recently been promoted to Director of Virtual Sales. Tiffany joined Mspark as a Local Account Executive in February 2015, and she transitioned to an Account Executive on the virtual sales team the next year. Tiffany was promoted to the role of Virtual Sales Manager in September 2018.  Her commitment to help the virtual division achieve its goals has been evident as she partnered with multiple internal departments to improve existing processes as well as implement new processes. Her commitment to partnership and innovation will help propel the virtual division forward.
Anna Marie Chapman, Vice President of Human Resources at Mspark, commented, “Our team members’ growth and development is a key strategy for Mspark. We are thrilled to reward our team members with these well-deserved promotions. We look forward to all these 3 team members will achieve in their new roles.”